If you ask a child to tell you about a hero, you might hear something about a pilot in uniform flying around the globe. Or you might hear about a firefighter who shows up in emergencies to rescue people and save the day. But even the most imaginative child likely wouldn’t combine the two into one—who would have the time or capacity for that? It sounds like something from a comic book: He flies over tall skyscrapers, leaps into burning buildings. Turns out, though, you just have to look to your Glen Ellyn neighbor, Jim Sisson, to meet that superhero.

Jim is the type of person who dives in. “I find something that really interests me, and I pursue it,” he says. So that explains the career as a pilot, and his volunteer position as Assistant Chief of the Glen Ellyn Volunteer Fire Company (GEVFC). “The flying thing is a passion. The firefighting thing is interesting and rewarding.”

As a child, his “first love,” since he was 3, was aviation. “That’s what I chased,” he explains. And also, as a high schooler, he watched a TV show called “Emergency” and got interested. He sought out work at his local station in Carol Stream, and a Lieutenant took him under his wing, allowing him to learn the basics and come to trainings. He became a probationary member and went on night calls during his first year of college at College of DuPage. He left the fire department when he transferred to SIU Carbondale. He began his career as a pilot, but he never let the idea of firefighting go. “It truly did get in my blood. The 10 years I was gone, it always was in the back of my mind,” says Jim.

When he settled with his family in Glen Ellyn, he finally got his chance to pursue both of his passions at once. As a pilot, his schedule gave him free time that he didn’t want to fill with golf or fishing—he wanted to get back the rewarding feeling from his time at the fire department all those years ago. He visited the fire department and started training to become a volunteer firefighter.

Jim says, “I’ve always been one to put myself out there to help in any way I can. I get a huge amount of satisfaction from helping people when they have problems. You know what they say: if you want to feel good about yourself, get out of yourself and help others. That’s what I was looking to do.”

Jim has been here ever since, and he even became Assistant Fire Chief 7 years ago. The GEVFC is a huge part of his life. So much so that, although he could live anywhere in the world as a pilot, he has stayed in Glen Ellyn to continue volunteering at the GEVFC.

Jim’s final thoughts? “I totally enjoy it. When I am done and retire, it will be difficult to leave. But I know there will be a time when it’s time to go, and move the next person into the position.”

Jim’s top three reasons to volunteer with the fire company: 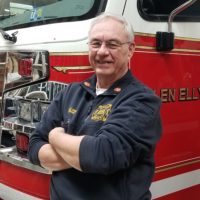 It’s very satisfying to know you’re going to help someone. People call us at the worst times of their life and we show up to help them in some way, shape, or form. As a volunteer firefighter, I truly value being able to help.

Jim’s thoughts if you are considering volunteering:

Jim says, volunteer if you want to: